As a young girl, Nikki van Schyndel would sneak away to a secret spot and daydream about living amongst British Columbia’s tall trees.

Throughout the years, she drifted from this dream and focused on urban life. In adulthood, though, she thought more about returning to her childhood fantasy. Van Schyndel honed her skillset in a survivalist program, and at 29 years of age, left her family and friends and spent a year-and-a-half in the wilderness with her housecat and a virtual stranger named Micah. During this time, she recorded a journal entry every day. Now, a decade later, van Schyndel has published a novel, Becoming Wild: Living the Primitive Life on a West Coast Island, to share her experiences from 18 months in BC’s wilderness.

EX: How did the people in your life react to you spending a year-and-a-half in the wilderness?

NV: It took a lot of courage. It was the most powerful driven urge of necessity and it didn’t make any sense in my mind of why I could feel so compelled to do these things, but I felt it was the right thing to do. It felt good when I thought about crawling around in the bush. I felt really happy. It was very scary to go against the norm and what my friends and family wanted me to do and be. I had to keep saying every night that this is something I really needed to do for me.

EX: Why did you want to share your story?

NV: I never thought I would write a book. I decided to compile all my journals and my mom said she would like to read it. I thought, “Oh my gosh, I can’t let you read that!” So I revised it. Then another person said they wanted to, so I revised it again, then another person… I did this four or five times — I spent so much time I thought to try and get it published. I did it for my mom. It’s a gift for her.

EX: Do you ever have flashbacks to your days in the wilderness?

NV: I do all the time. The lessons I learned there are still very strong in me today. We could see the direct benefit from our thoughts. For instance, we would start to worry we didn’t have enough food for the winter and our whole act of worrying made us not get food. The day we stopped worrying was the day we caught three large fish… I can listen to my heart and intuition so well now.

EX: What are you up to nowadays?

NV: I run EcoVentures — it’s a speedboat-based tour operator. I take people out into the wilderness here in Echo Bay [BC]… it’s a day in the life of a coastal survivor. We harvest plants, explore and see wildlife. We cook up our wild edible meal on a fire and eat out of clamshells.

EX: In a review of your book tour, it was said you are: “…A self-described ‘survivalist.’ She’s not the weird kind of survivalist who thinks the world is going to end tomorrow. But, one who has the utmost respect for and interest in the natural world around her.” What does that mean to you?

NV: If you look around, there are a lot of negative things in our world. I decided to concentrate all my energy towards the positive things I see happening. We talk about all the terrible things instead of the light in the world. The basis of my life is: fear or love. Every other emotion falls into those two categories. So I choose to live in the love. You have to seek out the light, and when you do the most amazing things happen to you… When you live your dream you’re the happiest person in the world because you’re doing what you feel is best for you. 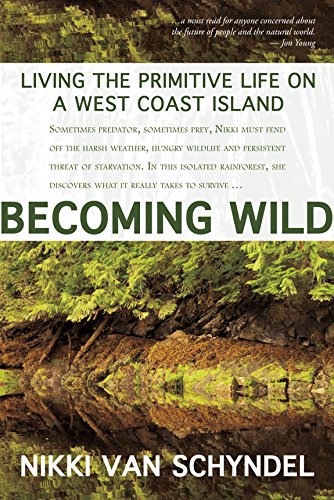